I sure don’t have the biggest following in the world, and no, I haven’t had some overnight skyrocket in followers like a few accounts we see around. But I have had consistent growth, and my engagement is awesome. I find social media and how we use it absolutely fascinating, so I’d like to think I have a little knowledge on the subject. So, I thought I would share the things I have noticed over the past few years — I hope you find some advice here that is helpful for your own account. 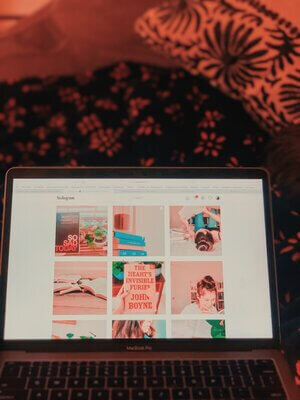 Righty, one of our favorite words. Let’s get right into it. What people don’t seem to realize is that you can have 10k followers, but only average around 200 likes per post. If you’re looking to eventually monetize and grow, I hate to break it to you, but those stats ain’t good.

Another common pitfall I see is when accounts follow the same amount of people that are following them. Personally, the golden rule that I like to stick to is the 10% rule. If you want to engage with brands one day (and let’s just admit it, who doesn’t?) then you’re going to need to show them more than your follower count. First off, they are going to want to see that people aren’t just following you for the follow-back — people actually need to like your posts if they are going to engage with them, which is what we are going to look at next.

I would recommend, just for simplicity’s sake, that you only follow around 10% of the amount of followers you have. No, don’t be a snob about it, but be honest — are you actually going to interact with over a thousand different people you follow? Are they all even going to show up in your feed? Probably not. Remember that when forming a community, the important connections are the quality ones. Focus on genuinely making friends. Not only is it more fun, it also means you don’t have to do that fake “comment on every big account post” thing that we all see right through by now.

You gotta stop tagging random accounts in your posts. Most of the people tagging me in their own photos (or in the comments of giveaways, etc., which is equally annoying) aren’t even people I follow, much less talk to. If the goal is to get a followback, I’m probably less likely to follow you now, actually. And I don’t know about everyone else, but I rarely go to an account’s tagged page to discover new people to follow, so I don’t think I really get the appeal anyways. Is that a strategy that works for some people?

Same for follow/unfollow. The oldest trick in the book, and somehow people still think it works. Nope! It’s just annoying.

Working with Brands that Won’t Scam You

If you get a comment asking you to DM another account, just ignore em (or reply a simple “no” if you are really paranoid about replying to everyone who comments). If you go check out their page, sure there might be some photos up that make it seem like this is a real account, but trust me, it’s 99% likely a throwaway. A lot of these companies use throwaway accounts because those accounts will often be deleted by Instagram as spam or bots. Because they are.

Here’s my deal: if someone is interested in having me work with them, they will take the two seconds to go to my profile and shoot me an email. If a brand/company/etc. reaches out to me through Instagram DM’s, I’ll refer them that way because honestly, I don’t like doing “business” over social media anyways. Call me paranoid, but I like to have a clear paper trail if I’m agreeing to anything. And if that company really plans on treating you like an actual business partner (which is how it should be), then they will be glad to send that info over email instead.

If you are tempted by those DMs, they will likely offer you a “personalized” discount code to go and shop on their site. Then, they ask you to post whatever you get in exchange for that discount. That’s not partnership y’all — it’s not even affiliate marketing. In fact, that brand is doubly profiting off of you — they get both a sale and free marketing. You shouldn’t even be paying for shipping.

One caveat: I am talking about big companies here. I have definitely worked with some smaller businesses before under different terms because they don’t do their advertising/marketing like the “big” brands. You can be more personal with them, and take into account the likelihood that they genuinely enjoy your content and thought you would be a great person to work with.

If you recommend something, mean it. Be selective. If you think those earrings are cute, but you don’t love them, then probably don’t advertise them on your account. The free stuff is tempting, but if you agree to take things in exchange for a post, then you have to post about them. And isn’t it annoying when an account includes an ad or affiliate link in every other post? It doesn’t come across as genuine, and with enough of this, your recommendation is going to mean a lot less.

If I do agree to a post, I always make sure that the other person understands that I only post positive reviews. A.K.A., if I don’t like their product, I’m not going to do a review on it. I think it sucks to post a bad review of something, but at the same time I’m only going to speak honestly about it. Personally, I think this is a good deal for both sides.

Everyone’s favorite topic. It seems like nowadays people tell you that hashtags are irrelevant or don’t work, and that’s absolutely not true. Hashtags do work. The algorithm, while ever-changing, doesn’t have it out for you. I’ll agree that Instagram (a.k.a. Facebook ugh) has made a lot of bummer choices recently that I personally don’t like, but in the end it still comes down to one thing: content.

Yeah, that’s the worst thing to hear, right? Obviously I wish I had some trick to share but those really don’t exist. There aren’t shortcuts. The truth is, if your content isn’t making it on Instagram and you still insist you are doing “everything right”, then you just aren’t.

Don’t believe me? Think of it like this: Instagram is a business, and like every other business, they want money. Instagram wants their users to be on their app as long as possible, scrolling past as many ads as Instagram can put in front of them. (Yeah, I agree, that’s the worst.) And what makes people stay on their app? Good content. Instagram doesn’t care who that content comes from — if people like it, they will put it in front of more of their users.

So, no, there’s not really a way to work the algorithm. Instagram isn’t blind to all those “tips & tricks” people are sharing.

Despite all that, there are ways that you can ensure more people see your posts. That’s where hashtags come in. You’ve probably heard by now that you should pick your hashtags according to size. That’s definitely true — in part. If you have only a few hundred followers and are trying to be seen in the #bookstagram tag, then it probably isn’t going to happen. That tag is saturated — but there’s a little more to it than just the total number of posts.

Take #bookstagram for example — there are more than 4,300 posts using this hashtag per hour. If we do a little more math — that’s about 72 posts a minute. Meaning that literally every second of the day, at least one person is posting using the #bookstagram hashtag. Unless you’re an account with followers quick to double-tap and boost you to the top posts tab, those odds are not in your favor.

The good news is, we can use this same strategy to find hashtags that will work for you. This is where my absolute favorite site comes in — metahashtags. And everything you need from it is free.

Let’s look at some more stats. The hashtag #bookish, for example, has nearly 11 million posts. But, the rate of posting is significantly less — about 531 posts per hour. No, that still isn’t good enough for an account just starting out, but 9 posts a minute certainly give you more screen time than #bookstagram does. Make sense?

Essentially, what we’re aiming for is having your post at the top of that recents tab for as long as possible, so more people who aren’t following you can see it. Next, we’ll take a look at #booknerdigans — 1.9 million posts in total, but only about 53 posts an hour. So, it stands to reason that posting in that hashtag would get you at least a minute at the top of the recents tab. Waaaaay better chances of getting seen than less than a second.

So while size can be a good indicator of how popular a tag is, there’s not necessarily a direct correlation to how long your post is going to stay showing there.

We can look at the opposite effect, too — #mybookfeatures is a tag that also has 53 posts in an hour, even though it has less than a fourth of the posts #booknerdigans does. There’s a massive difference between 430 thousand posts and 1.9 million posts, and yet, you’re likely to get the same exposure in both. That’s why I focus a little more on post saturation than I do total number when I’m picking out my hashtags. Like I said, smaller hashtags are likelier to have a that low post saturation we’re looking for, but not always.

I hope that mumbo jumbo made sense. Really though, this strategy has been the most reliable for me — let me know if you try it and how it works out!

Woo! Okay, I think that was the gist of things. I find social media super interesting, so I could go on for a while, but I tried to keep it short. Oops. If you have questions, or would like me to clarify anything that was said in this post, feel free to hit me up via my contact page or my social media DM’s. Like I said, this kind of thing is fun for me!