Content warnings for Grown Ups provided at the bottom of this post, for those who would find them useful. 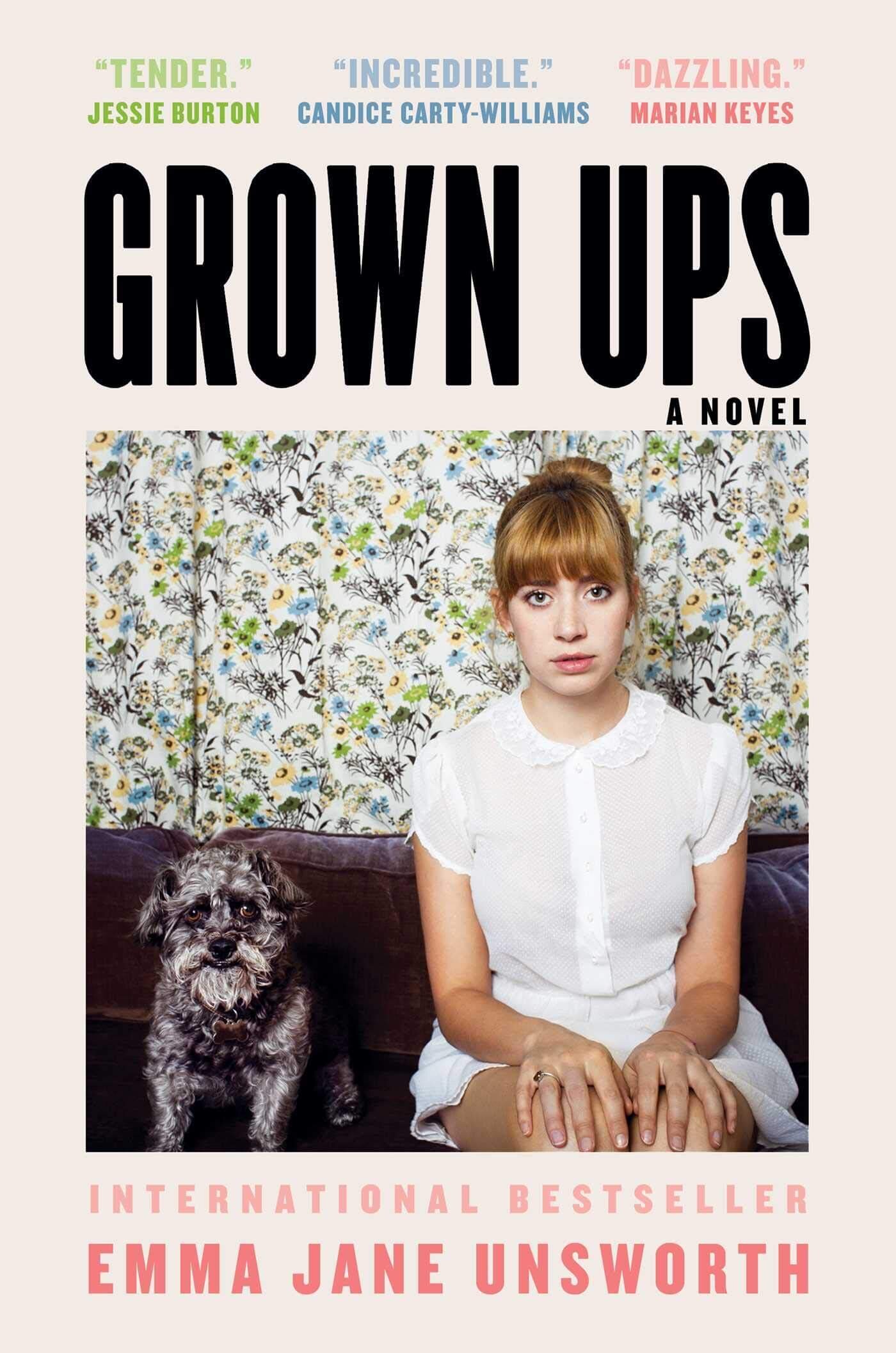 Jenny McLaine’s life is falling apart. Her friendships are flagging. Her body has failed her. She’s just lost her column at The Foof because she isn’t the fierce voice new feminism needs. Her ex has gotten together with another woman. And worst of all: Jenny’s mother is about to move in. Having left home at eighteen to remake herself as a self-sufficient millennial, Jenny is now in her thirties and nothing is as she thought it would be. Least of all adulthood.

Told in live-wire prose, texts, emails, script dialogue, and social media messages, Grown Ups is a neurotic dramedy of 21st-century manners for the digital age. It reckons with what it means to exist in a woman’s body: to sing and dance and work and mother and sparkle and equalize and not complain and be beautiful and love your imperfections and stay strong and show your vulnerability and bake and box…

But, despite our impossible expectations of women, Emma Jane Unsworth never lets Jenny off the hook. Jenny’s life is falling apart at her own hands and whether or not she has help from her mother or her friends, Jenny is the only one who will be able to pick up the pieces and learn how to, more or less, grow up. Or will she?

I’m not even gonna hold back on this one: I think Grown Ups has safely secured its place in my 2021 favorites. I was absolutely wowed by it.

Once again, this seems to be a title that was first published under a different name in the UK (Adults) and eventually made its way over here to the US. (It isn’t strictly true when people say that the US has the best publishing scene, in my opinion.)

My initial thoughts of this novel were, well, not indicative of how I would feel by the end of the story. Jenny’s story starts off rather light-hearted, if a bit depressing in places, but in almost a satirical tone. That’s what I expected of this book — an unlikable character that highlights our world’s obsession with technology in the most hilarious of ways.

For the first 30%, that’s what I got. I even posted on Instagram stories that I was actually getting a tad stressed out by the frightening accuracy and anxiety Jenny displays. Truly, Unsworth is a master of writing cringe-worthy, and the back cover description “neurotic dramedy” is the most accurate phrase I’ve heard a publisher use in a while.

And that surprising shift in tone is what made this book so remarkable for me. Yes, I came for the laughs, but right when the material might seem to get a little old, the character a little too annoying, Unsworth breathes this bit of sweetness and fragility into it in one scene in particular. Despite how different I think Jenny and I am, I immediately felt tied to her purely thanks to the human factor shown in this instance of kindness. It isn’t often that you find an author who can balance faults and likeability so deftly, and is a trait that I’ve definitely lauded before in previous reviews.

Complexity after complexity arise during this story, and each and every character surprised me at one point or another. Good characters do bad things. Bad characters do good things. I appreciate this kind of honesty (because rarely in life do we meet a truly “bad” character). Despite how vehemently I might disagree with some of Jenny’s actions, she always managed to draw me back in. Maybe because I identify somehow with her, as difficult as that might be to parse out and admit.

I think this is where I end the review and say that I absolutely think you should pick this book up. Get at least 30% of the way through before you bail and decide it isn’t for you. I have seen some poor reviews of Grown Ups, so maybe it just isn’t for some people, but I think there is true genius in this story, and I don’t want it to go underappreciated.

Grown Ups by Emma Jane Unsworth was released August 20, 2020. Although Gallery/Scout Press, Simon & Schuster Audio and libro.fm provided me with a free review copy, this did not in any way affect my review.

On Content Warnings and Why I Am Using Them

Review: Instructions for a Funeral by David Means & Infinite Detail by Tim Maughan