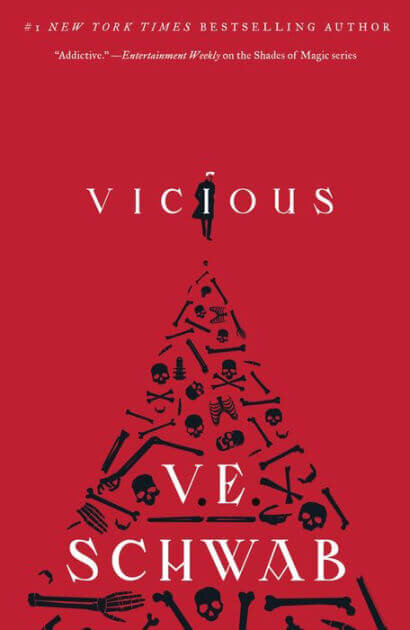 Victor and Eli started out as college roommates–brilliant, arrogant, lonely boys who recognized the same sharpness and ambition in each other. In their senior year, a shared research interest in adrenaline, near-death experiences, and seemingly supernatural events reveals an intriguing possibility: that under the right conditions, someone could develop extraordinary abilities. But when their thesis moves from the academic to the experimental, things go horribly wrong.

Ten years later, Victor breaks out of prison, determined to catch up to his old friend (now foe), aided by a young girl whose reserved nature obscures a stunning ability. Meanwhile, Eli is on a mission to eradicate every other super-powered person that he can find–aside from his sidekick, an enigmatic woman with an unbreakable will. Armed with terrible power on both sides, driven by the memory of betrayal and loss, the archnemeses have set a course for revenge–but who will be left alive at the end?

Perhaps unsurprisingly, the horrifically dense pressure of being thrown into the wild after an online college graduation during an increasingly deadly pandemic appears to have shifted my taste in literature, at least for the time being. I’ve found myself straying from my English-major-approved literature and reaching for books that did something different. Books that built worlds that I could recognize, but I had clearly never lived in. Places that I could escape into, but not feel as lost as I did whenever I put the text down. I was looking for a particular type of fantasy that didn’t require the effort of a reference map or character index. And boy, did I find it.

V. E. Schwab’s Vicious follows two timelines: In the first, two hungry university students search for proof that not only do super-powered individuals (referred to as EOs) exist, but attempt to recreate the ways in which they are created as well. They use themselves as guinea pigs and succeed— but at a cost. Fueled by jealousy, science, faith, and the need for something more, the boys find themselves dealing with the consequences of something they are only just beginning to understand.

The second timeline, set ten years later, follows Eli and Victor after a brutal incident. Eli has come to believe he sees EOs for what they are: monsters that must be eradicated. Meanwhile, Victor has escaped from prison with the myopic drive of eliminating the only real monster he believes there is: Eli himself.

Vicious takes place in the fictional city of Merit. The writing is reminiscent of an adult comic book without being overly kitschy or comical. It favors gritty action, quirky but exciting and well-rounded characters, and a revenge-focused plot, but also includes aspects of real life. There’s familiarity in small details; like the use of cell phones, the education system, and transportation, that make this world easy to accept and understand without feeling exhausted or confused by an entirely new set of cultural rules.

But unlike most other comic-style novels (comic books, if you will), V. E. Schwab’s writing is more than willing to dig deep into the blood and pain that comes with this sort of lifestyle. In this universe, EOs are not heroes. By virtue of how they got their powers, most of them deal with incredible emotional pain and uncertainty, preferring to retreat into societal shadows and stay low.

This choice also contributes to my favorite aspect of the book, that is, the depth of each character’s motive. Both Eli and Victor have a legitimate argument, making for an equally legitimate drive and legitimate hatred for each other, while somehow holding distinct voices and characters. Their backstories and choices are juicy and compelling, and with every chapter we understand more and more about why they feel so determined to end the other.

In the beginning, these boys felt familiar and human to me. By the end, I found them dangerous and foreign. Watching their emotional transformation was almost more exciting than watching their physical one, which is not an easy thing to accomplish writing-wise, especially when superpowers are involved. I’ll keep Eli and Victor’s powers a secret (as they’re a big part of the first timeline), but the next paragraph contains minor spoilers in favor of character reviews, so beware!

Rounding out the cast is an equally well-written ragtag group of supporting characters. There’s Sydney, a middle schooler with the ability to raise the dead; Serena, Sydney’s sister and Eli’s girlfriend, with the uncanny ability of persuasion; Mitch, Victor’s hulking human sidekick with a knack for coding; and Stell, the detective hell-bent on bringing them all down. And yes, there’s also a dog: Dol, Sydney’s unerringly loyal undead rescue.

They work in tandem with Eli and Victor to complete complex and exciting teams, in which everyone is desperate to survive, though only some are eager to escape from the shadows and thrive. In the best way, the ways in which these teams worked reminded me of the friend groups most often found in Young Adult novels, which maybe should be expected, considering V. E. Schwab also works heavily in that genre (under the name Victoria, rather than V. E.).

Rather than feeling too infantile or expected, the teams make sense, with powers complementing powers, all the while highlighted with darker undertones that walk the line between force and choice, which mimics the larger theme of the book as well.

I’m a sucker for superheroes, and I’m so glad to finally have found a book that didn’t sacrifice adult themes in order to give me the thrill of supernatural powers. Needless to say, I loved this book. I finished it in two days, because every time I picked it up I couldn’t think of anything but the characters on the pages. Not only did it distract me, it immersed me in its world and its people, and for that I recommended it wholeheartedly.

I read the sequel, Vengeance, immediately after and found it even more incredible, if you can believe it. But even though you’ll have to start here, it’s a gift, and if you’re anything like me, you’ll tear through it before you even realize how addicted you’ve become.

Emma-Lee Miller is a writer and graduate of Bucknell University. Currently, she is working on her first novel, a global psychological thriller. She is also from New Jersey, which she will die defending.

Read It In Order: Alex Rider