This is one of those books that I had heard about and seen around for a long time, but didn’t really know anything about when I decided to pick it up. I’m not usually one for thrillers, but my other love (besides books) is true crime podcasts, so I thought this would be an interesting one. The audiobook itself is award-winning and everyone I know who has listened says it’s amazing due to the full cast and recording of the actual “podcast” within the story, so of course I decided I would go that route. 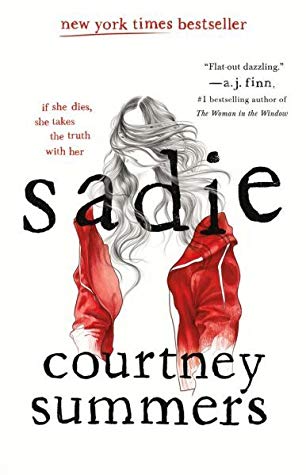 A missing girl on a journey of revenge. A Serial―like podcast following the clues she’s left behind. And an ending you won’t be able to stop talking about.

Sadie hasn’t had an easy life. Growing up on her own, she’s been raising her sister Mattie in an isolated small town, trying her best to provide a normal life and keep their heads above water.

But when Mattie is found dead, Sadie’s entire world crumbles. After a somewhat botched police investigation, Sadie is determined to bring her sister’s killer to justice and hits the road following a few meager clues to find him.

When West McCray―a radio personality working on a segment about small, forgotten towns in America―overhears Sadie’s story at a local gas station, he becomes obsessed with finding the missing girl. He starts his own podcast as he tracks Sadie’s journey, trying to figure out what happened, hoping to find her before it’s too late.

My Review of Sadie

I think that maybe I would have liked Sadie better if I had read it on paper. I love the idea of a story spanning multiple medias, and the fact that Macmillan really invested some resources into this one, but I think I listen to podcasts too often and it didn’t quite strike me as authentic. Eventually, it grew on me for sure, but I nearly put this one down to begin with because:

1) I really disliked the tone of the actress reading Sadie —she sounded disgusted with everything. If I hadn’t listened to this one on 1.5x I don’t think I would have made it.

2) The podcast didn’t feel real to me, though again, I might have to count that as a product of having listened to too many.

Additionally, I got the sense that this author doesn’t much like the entertainment factor of true crime podcasts, making several pointed remarks about podcasts detailing gory scenes for enjoyment, etc. I agree with this, of course, but in continuing the in-book podcast reminded me a bit much of satirical podcasts like Done Disappeared, which make fun of true crime tropes.

However, the story is dynamic and told in a unique manner — as throughout the book you know what is really going on with Sadie even as the podcast tries to discover it, and yet both story lines are interesting despite the purposeful “spoilers”.

Summers is, however, very good at portraying the duality of people. There are multiple love interests, everyone is shown in different lights, and the book accurately depicts a story that changes depending on point of view and false leads.

In the end, although I definitely didn’t like Sadie the character, I really enjoyed this story. Maybe sample the audio first though and see how you feel when deciding on a format.

Popular Books I Couldn’t Get Through

A Very Spoilery Chat: Beautiful World Where Are You