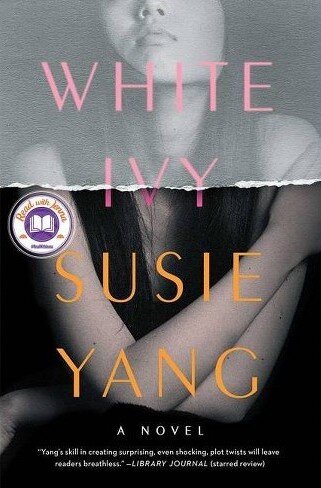 Ivy Lin is a thief and a liar–but you’d never know it by looking at her.

Raised outside of Boston, Ivy’s immigrant grandmother relies on Ivy’s mild appearance for cover as she teaches her granddaughter how to pilfer items from yard sales and second-hand shops. Thieving allows Ivy to accumulate the trappings of a suburban teen–and, most importantly, to attract the attention of Gideon Speyer, the golden boy of a wealthy political family. But when Ivy’s mother discovers her trespasses, punishment is swift and Ivy is sent to China, and her dream instantly evaporates.

Years later, Ivy has grown into a poised yet restless young woman, haunted by her conflicting feelings about her upbringing and her family. Back in Boston, when Ivy bumps into Sylvia Speyer, Gideon’s sister, a reconnection with Gideon seems not only inevitable–it feels like fate.

Slowly, Ivy sinks her claws into Gideon and the entire Speyer clan by attending fancy dinners, and weekend getaways to the cape. But just as Ivy is about to have everything she’s ever wanted, a ghost from her past resurfaces, threatening the nearly perfect life she’s worked so hard to build.

Filled with surprising twists and a nuanced exploration of class and race, White Ivy is a glimpse into the dark side of a woman who yearns for success at any cost.

My Review of White Ivy

As I’ve expressed on social media, this book was not what I expected — in the best possible way. I wouldn’t exactly call it a thriller, but White Ivy certainly wasn’t boring. Thanks to the book’s length, the story at the beginning seems quite different from the one at the end, but looking back, the progression is natural and engrossing.

If you’re looking for a book with a happy ending, you might want to come back to this one later, because it certainly isn’t happy. I wouldn’t say the ending is sad either though — in fact, the characters get what they deserve, which I think is the most satisfying ending of them all. I was a bit stunned at where the book leaves us, but after the initial shock (I was listening on audiobook and hadn’t realized I was on the last chapter, HA), I really admired Yang’s restraint. She could have gone further, but I think a lot of authors tend to wear their readers out doing this, and things feel more like they slow to a stop rather than end on a high note. I much prefer the latter.

The second half of the book gives off a lot of the same vibes as The Secret History, so perhaps that is an incentive for fans of that particular read. Not sure that everyone would agree with me that what Yang does here actually counts as genre-switching, but I think we need a stronger phrase than “plot twist” to describe the most dramatic scene of the book. Personally, I’ve found that books rarely manage to pull off genre-switches, as it is a fairly ambitious move. But in White Ivy I thought it was wonderful and smooth; the reader sinks into change along with Ivy, and nothing feels too sudden. I’m not going to go into it any further, because I think we would be wandering into Spoiler Territory, but send me a message if you’d like to discuss more.

I didn’t find much I wanted to critique, but one thing did end up standing out. (Although that might change after talking it over a little with others.) For books with twists, I often like to look back and find the hints that were dropped along the way — I think a lot of us appreciate the re-reading of a book just for this purpose — but there was one twist in particular nearing the end of the book that I couldn’t seem to justify. Maybe it’s just the writer in me that is being nit-picky about it, and honestly, it wasn’t a big deal compared to how good the rest of the book was.

Overall, yes, White Ivy was worth the hype in my opinion.

Thank you to libro.fm & Simon and Schuster for my copy of White Ivy by Susie Yang. As always — this did not affect my review in any way.

Review: They Both Die At the End by Adam Silvera