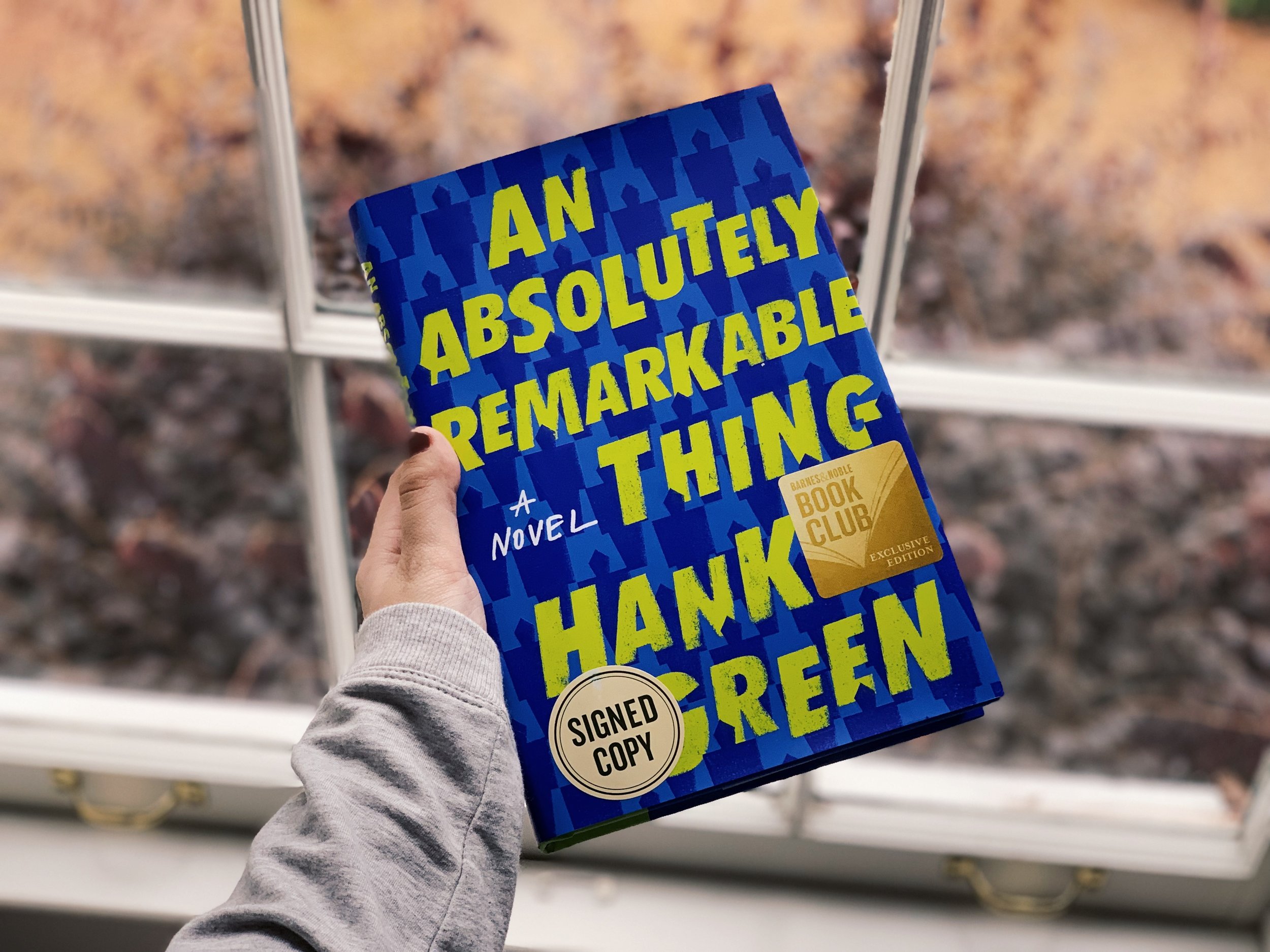 Roaming through New York City at three a.m., twenty-three-year-old April May stumbles across a giant sculpture. Delighted by its appearance and craftsmanship–like a ten-foot-tall Transformer wearing a suit of samurai armor–April and her best friend, Andy, make a video with it, which Andy uploads to YouTube. The next day, April wakes up to a viral video and a new life. News quickly spreads that there are Carls in dozens of cities around the world–from Beijing to Buenos Aires–and April, as their first documentarian, finds herself at the center of an intense international media spotlight.

Seizing the opportunity to make her mark on the world, April now has to deal with the consequences her new particular brand of fame has on her relationships, her safety, and her own identity. And all eyes are on April to figure out not just what the Carls are, but what they want from us.

Compulsively entertaining and powerfully relevant, An Absolutely Remarkable Thing grapples with big themes, including how the social internet is changing fame, rhetoric, and radicalization; how our culture deals with fear and uncertainty; and how vilification and adoration spring for the same dehumanization that follows a life in the public eye. The beginning of an exciting fiction career, An Absolutely Remarkable Thing is a bold and insightful novel of now.

I actually read this one a while back, but really backlogged on reviews at the moment because of how busy school has been!  But better late than never, right?  Plus, I really wanted to write down my thoughts on this one, because they shifted a lot throughout the course of reading and long after I had finished it, as well.

I wasn’t really sure what I was expecting, but I think how I would describe this one was like a millennial Grasshopper Jungle.  Basically, the novel opens and these giant statue-like figures are dropped all across the world in major cities, and the one to break the story is normal college student April May, her friend Andy, and their video camera.  April May dubs the New York City statue “Carl”, which catches on, skyrocketing her to fame, and putting her at the head of a movement to discover the Carls’ true purpose — all while altering her relationships and career.

I will say that this is a very Hank Green novel, as in, if you are a fan of his other projects, I’m betting you’ll like this one.  It’s quirky yet touches on important topics, all while keeping a quick, adventurous pace.  The plot having so heavily to do with social media isn’t surprising, considering Hank Green found his fame on YouTube — despite the fact that the culture has shifted a lot since his debut, he still writes an accurate portrayal.  I think the average teenage or twenty-something reader would find this story and its analysis of how social media functions in our lives fascinating, and a surprising twist on the whole invasion narrative.  Green also has a way of providing nuanced parallels to our modern political turmoil, explaining in Crash Course-esque language exactly the way certain events unfold, which I think is worth mentioning considering this is an important component to writing for today’s teenage audience.

When I said at the beginning of this post that I had mixed feelings, it’s because I didn’t initially find April very likable — in fact, I’m still not sure how I feel about her.  She’s quite the flawed character, but I think that Green is aware of this, having her admit her faults to the reader on more than one occasion.  In fact, it becomes a bit of a theme. For me, the jury’s still out on whether this actually succeeds in making her more likable.  But nonetheless, it seems to provide an accurate portrayal of sudden fame.  The actual storyline and other characters, however, kept me invested in the story.

There were also things I loved and hated about the writing.  For one (and not to compare Hank too much to his brother, John Green, because I think everyone is doing that and he is an author in his own right), his writing had that casual, quirky feel that speeds things along that John Green is known for.  It did take a little getting used to though — I don’t know if this was because I was tired, but the syntax of the first few chapters kept tripping me up.  There was also a lot of usage of capitalization, which I’m not particularly a fan of — often, the writing felt a little too much like a stream-of-conscious.  The whole thing just gave me the impression that the editors of this one were a little too indulgent.  Nevertheless, Green is clearly a talented writer.

Overall, this was a great read, and I’m looking forward to the sequel!