The Smash-Up by Ali Benjamin Summary 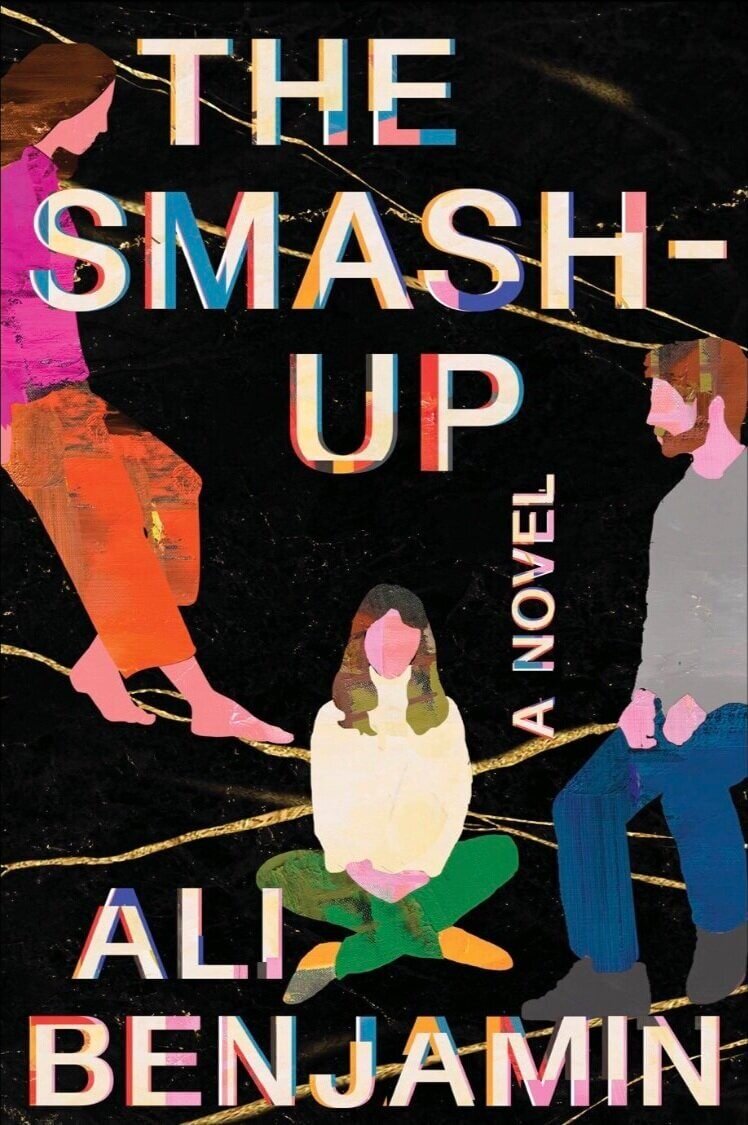 It’s September 2018. In Washington, D.C.,—and in cities and towns across America—women have taken to the streets to protest a Supreme Court nominee. And in Starkfield, Massachusetts—a sleepy rural town where nothing much ever happens—Ethan Frome’s otherwise quiet life has turned upside down.

Ethan’s wife, Zo, is so enraged by the national political scene that she’s transformed their home into a local headquarters for the Resistance. His college roommate and former business partner faces #metoo allegations, sending Ethan into increasingly desperate financial straits. His unruly, headstrong daughter, Alex, grows more challenging by the day.

Enter Maddy Silver—a breezy, blue-haired millennial making her way through the gig economy. Suddenly Ethan and Zo must question everything: their past, their future, their marriage, and what they value most. And all the while, a world-rocking cultural smash-up inches ever closer to home.

Inspired by a classic Edith Wharton novella about a strained marriage in a small town, The Smash-Up is at once an intimate, moving portrait of a family in distress, a vivid examination of our roiling national rancor, and a powerful exploration of how the things we fail to notice can shatter a family, a community, and a nation.

Ali Benjamin is a National Book Award Finalist and NYT bestselling author. Her works include The Thing About Jellyfish (2015) and The Next Great Paulie Fink (2019). The Smash-Up is her first adult novel.

I first started reading The Smash-Up by Ali Benjamin while I sat in the parking lot of my polling place the day of Georgia’s runoffs. I had a pile of Ossoff/Warnock flyers next to me — I had been doing some last-minute door-knocking and stopped to vote and grab a bite to eat. I didn’t know what The Smash-Up was about going into it — I just picked from the titles I had already downloaded onto my kindle. In other words, I so didn’t expect it to resonate with me in the way that it did.

I was lucky enough to get to ask Ali some questions about her latest release, and yes, she is just as thoughtful and insightful as you would think. Fair warning for you reading purists out there — there are some very light spoilers. (More spoilery-suggestions, really. Thoughts akin to spoilers.)

Could you talk a little on the choice to write the majority of this story from Ethan’s point of view?

Ali Benjamin: Ethan was a perfectly imperfect character through which to explore this cultural moment — both its disorientation and its possibilities. So many of us are unlearning, and relearning (and then unlearning and relearning, ad infinitum) the world around us — interrogating assumptions we didn’t even know we held, learning to hold multiple perspectives simultaneously, reflecting on our collective history and our individual past behaviors with new understanding and new regrets.

Ethan’s bumbling his way through all of this. He’s a decent guy, but he’s missed some really important things through the years. For one thing, he’s assumed that he and his wife have been walking through the world together, as a unit, sharing more or less the same experience. Now suddenly his wife is filled with a fury that he doesn’t share and cannot comprehend. He’s trying, and he’s failing, and one of the biggest questions of the book is: just how big will this failure be?

It was artistically satisfying to create that slow reveal for him — seeing through his eyes as one layer after another of his world peels away until he’s faced, head-on, with the raw horror of what he’s missed. But writing from his point of view brought some challenges. One of the biggest was this: How do I center a character who is not only blind, but also considering cheating on his wife with a younger woman . . . without making the reader want to throw the book across the room? One of the ways I tried to do that was by playing with perspective. For example, the first couple of glimpses we have of Ethan are from the outside; one gets the sense that we’re spying on him. So right off the bat, it’s clear that his perspective isn’t the perspective. This approach also reduces the scale of his point of view; he’s just a guy, small enough to be watched, perhaps even judged. It also, right from the start, opens the possibility that no one emerges from this narrative unscathed.

There is a lot to dislike about Zo, exacerbated by the fact that we are seeing her through her husband’s eyes. She and Maddy seem to act as foils to one another, and yet both are eventually held up as symbols of misrepresentation. They were perhaps the two most difficult characters to confront for me personally, because they force us to do some uncomfortable (yet necessary) examination of how we as women of differing races and backgrounds advocate for one another. I’d love to know a little more about how you developed these two characters and their stories.

When I first decided to re-tell Ethan Frome, I returned first to Edith Wharton’s novella. I hadn’t read it since I was fifteen years old. Re-reading it as an adult, the first thing that struck me was how binary and stark the women’s ascribed roles were. It was Zenobia vs. Mattie, witch vs. innocent, crone vs. sweetheart, old/sickly vs. young/fair. One was likeable, one was not. But neither felt especially real or whole.

Meanwhile, in 2018, basically every woman I know had given up caring whether they were likeable — all had seemed to say, “fuck it.” So I wanted the 2018 versions of these characters to be a little hard to like. I wanted them to be boldly, conspicuously messy, flawed in different ways. I transformed Zenobia’s “sickness” into rage at Trump-era politics, which of course is actually about something much, much deeper. Mattie’s easy laughter of 1911 became 2020 Maddy’s “lol, nothing matters” breeziness…which, too, is a cover. The forces that shaped each woman emerge slowly, only as the narrative unfolds, and yes: ultimately we learn that the women aren’t so different from one another, or us.

When writing, I definitely had to confront some of my own assumptions about women’s likeability. One of my tests for myself as I wrote was this: how would this behavior or trait feel if we saw it in a man? Zo, for example, can be argumentative. She can be distant, and condescending. She’s quietly, tacitly, defaulted on the most tedious parenting duties, leaving them to Ethan. And while I realize it seems almost banal to observe that men do these things all the time, my own ambivalence about assigning these traits and behaviors to a woman (a wife! A mother!) is revealing.

The Smash-Up is set in 2018, although considering how crazy the world is, I personally feel as if more time has passed. Given the time we’re in, how were you able to choose a point at which to stop? How is it to write a story we seem to still be in the middle of?

Ali Benjamin: Yes, so much has happened since 2018, it’s dizzying. The book feels almost like a work of historical fiction at this point!  Although the story unfolds during the week of the Kavanaugh hearings, I actually wrote the bulk of the first draft prior to that week. Then, when Kavanaugh was nominated, it felt as if the world around me had become a distillation of every idea I’d been struggling to explore on the page. So I went back and rewrote the draft, using the events of that week as the anchor for Zo’s rage.

I didn’t write the book because I had any easy answers; it was more to articulate (to myself as much as anyone), “this is how it feels to be here now.” It was like a primal scream from inside the chaos.

The book releases on February 23, shortly after the Biden/Harris transition, but The Smash-Up so easily could have been released into a world where the election had quite a different outcome. Were you considering this during the process of writing/editing? Do you think the victory in November changes the lens through which readers will see the story?

Ali Benjamin: Oh, absolutely. I completed the final manuscript in May of 2020 understanding that the stakes of the election were total, but without a clue how it – or America – would shake out.  I also knew that even in the most hopeful scenario, things were going to get much, much worse before they got better, though I couldn’t predict what would unfold. So a single ending needed to contain dual meanings, and to hold up in a variety of (unimaginable) scenarios. I reworked the ending again and again, trying to get that right. If one reads the end while imagining a counterfactual history — i.e. a Trump win, or a successful coup attempt — that same ending starts to feel quite different. And yet the fundamental question with which the book ends remains the same.

Not to spoil anything, but the ending is nothing like you would expect – there’s a lot to take in and process in those last few chapters. It feels like we were left with a lot of purposeful loose ends and questions to mull over, which perfectly encapsulates these strange times. If readers were to take away one thing from The Smash-Up, what would that thing be?

Ali Benjamin: Yeah, there’s some deliberate ambiguity to the ending. That’s just what felt most true to this moment. Even with that ambiguity, I wanted the ending to be satisfying. I wanted to create a sense of an expansiveness in the reader, almost like they witnessed a firework explosion of pure possibility. Above all, I wanted readers to step squarely into the space that exists between people’s lived experiences, and from that space glimpse — even just briefly, even if only as a flicker — what could be, if we can finally start to close that gap.

Thank you so much to Ali for taking the time to answer my questions so thoughtfully, and Jess at Random House for facilitating!

The Smash-Up by Ali Benjamin is scheduled to be released by Random House on February 23, 2021. Although I received a complementary review copy, this has in no way affected my opinion.